by kalixto
in Leaked, Life Hack, News
Reading Time: 2 mins read
A A
0 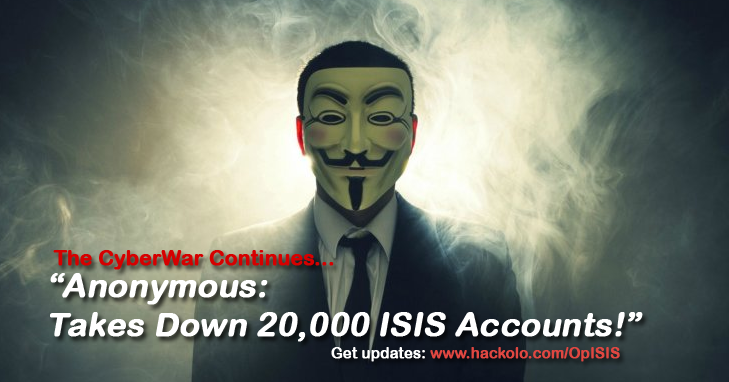 Last week Anonymous declared an online war against ISIS and it’s no denying Anonymous is at total CYBER WAR with Islamic State Militant Group (ISIS). Anonymous is not sending missile on ISIS bases but rather giving ISIS a headache on their social propaganda campaigns to spread their cruelty and Anonymous is doing a great job!

#OpParis is far from over! On a Youtube video posted on November 18 Anonymous publicized 20,000 ISIS affiliated Twitter accounts has been banned in a day. Anonymous is publishing these accounts on public paste sites like pastebin.com see the trending paste.

ISIS responded when Anonymous declared an online war telling the group “IDIOTS, what are they gonna hack?“with this context surely ISIS is moved by Anonymous threat against them. The group has since then taking down ISIS accounts, publicizing ISIS related websites, email accounts, web hosts and more…

Want to joint the Cyber War against ISIS?

Anonymous has published a tutorial on how you can crack down ISIS affiliated Twitter Accounts. Read this tutorial how: http://pastebin.com/eTD20MfJ

The process involves some teachy stuff which might confused people not into technicals however, the step-by-step guide will surely make  your understand the whole process with ease.

Method: How to Hide Your Real IP Address Easily

Method: How to Hide Your Real IP Address Easily