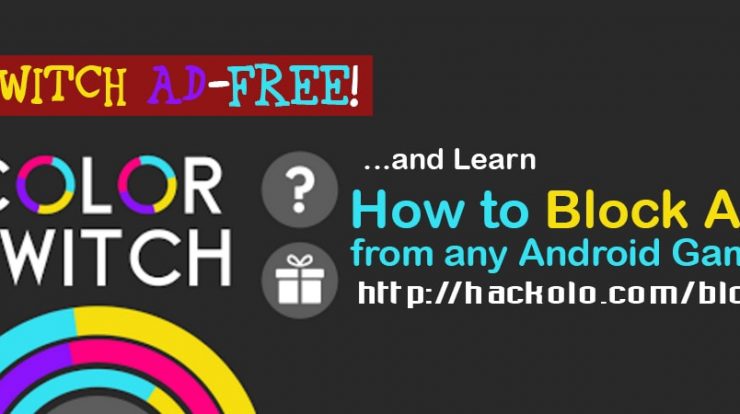 Block Ads from Any Android Games/Apps

We all hate advertisements especially if you are playing your favorite game and in the middle of the game concentrating on how to beat the level to acquire some coins/stars/bonus of something. But this annoying ad came like a their in the night destroying the mood and you will lose your appetite on continuing the game.

Say for example the Color Switch is really a fun game especially the MODES section where’s the fastest possible way to get more stars to buy your favorite balls or something. But, it has this annoying ads constantly coming after some time while you are in the game. I found few ways to remove the ads on the game one is by turning off your WIFI before opening the game and the other is by downloading this modified or modded apk file of color switch.

Ways to Remove Ads on Any Game

By turning off your wifi connection your phone will not be loaded with signals from the app to get some ads. It is impossible to deliver ads if you have no internet connection! But you will loss being connected though.

Well, this is the fastest and legal way to get off ads from the game. Well, if you have some few bucks to waste on buying the no-ad version then do as you please. But some folks, don’t have money but they have a lot of time so the next method is the best for them.

By Downloading the Modified Version of an Android Game/App

Some developers can edit apk files and remove or add everything that they wanted and if we are lucky they can even share it to us and the finish product is called the “Modded APK” … They can remove the ads or add STARS or even unlock all LEVELS! How was that for modified but unlocking the levels removes the fun as well. So I highly recommend to play the games legally just remove the ads though.

So, that’s how you block ads from Color Switch game or any Android Games.

NOTE: These ads is one of the way that the game developer is making money off their games/apps so if you had fun playing the game you may as well give something in return for the developer that gave his time to develop the game.