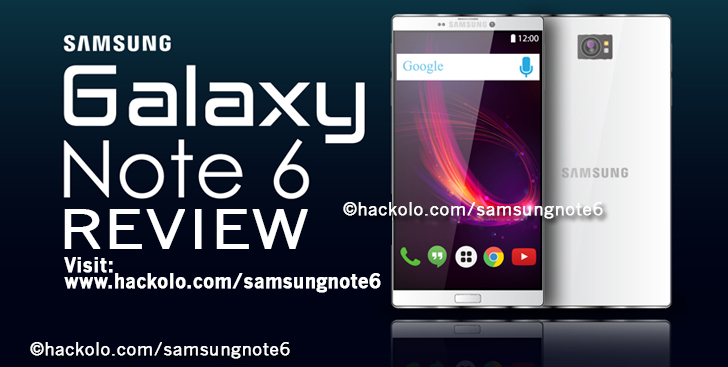 Samsung will soon be launching another member of the Galaxy Note family in the latter half of 2016, that means only a few months away. Samsung was supposed to launch this new family member last year, but it went on to launch the Galaxy S6 Edge+, which won the company the frowns of loyal note users. So to counteract this, Samsung plans to bring the Galaxy Note 6 out this year only, to calm the angry fans down.

In the earlier half of 2016, Samsung launched the Galaxy S7 Edge, and teased the launch of the Note 6 in the latter half, to keep the loyalists on the “Edge” of their seats, awaiting the arrival of the prodigal phablet. Interested parties took the S7 with wide open arms, but the Note loyalists are still holding their breath for the launch of the Note 6. So, before Samsung officials officially announce the launch of this new device, we have accumulated a few intricate details of how and what the Note 6 is going to be. The information has been collected from reliable sources, so the details given below are credible in nature. Read on to find out more.

Rumors suggested that Samsung is planning an August 2016 launch for the Samsung Galaxy Note 6. This would mean that Samsung would be maintaining its annual ritual of launching a phablet with a one year gap between all the launches, viz, Note 4 launched in October of 2014, S6 Edge+ launched in August of 2015.

The fans are the ones who need to be thanked for Samsung’s quick response in launching the Note 6 into the market. The Samsung phablet loyalists simply rejected the S6 Edge+ when it was launched, because the Note 5 was one of their favorite devices, and they did not like the fact that it was replaced. Seeing this disheartening fan reaction, Samsung advanced its plans and slated the August 2016 release date so as to appease the loyalists and maintain a stable clientele.

The release date is soon to be disclosed by Samsung. It was earlier rumoured that the date would be disclosed when Samsung would launch the Galaxy S7 and S7 Edge. But since that did not happen, we can expect that the dates will be announced in the month of June or July. Although the prevailing rumours suggest this, Samsung, in the past, have been known to announce the release date only one week before the actual release. So anything could happen. The users just need to hold on to their breath, be on the edge of their seats, and revel when Samsung finally decides to disclose the official launch date.

A lot of mystery surrounds the probable price of the Galaxy Note 6. This variant does not come with a curved screen like the Edge models, so that indicates lower costs, but it has also been rumoured that the size of this Note will be larger than any other Note released earlier, so that will again cause an increase in price.

If we look at the previous variants, the Galaxy Note 5 was launched at the price of USD 700.00, whereas last year’s Galaxy S6 Edge+ came at a price of USD 1085.00. So, after comparison and a lot of math, it can be quite easily justified that the Galaxy Note 6’s price will be somewhere between the price range of these two variants only. But then again, we need to wait for the exact specifications, as the price may vary on how much internal storage is provided by Samsung.

Specs and features of the Samsung Galaxy Note 6

Before the official launch, both the Galaxy S7 variants faced a lot of leaks from credible sources in terms of specifications and features. But right now, not a whole lot of information is available on the internet regarding the Galaxy Note 6, as there have not been many leaks as of yet.

Even after this, there are a few things that have been confirmed by our sources, so we can talk about these specs with confidence and conformity. The Galaxy Note 6 is sure to have the S Pen stylus, as the Samsung users did not appreciate the fact that the S6 Edge+ did not come with it. The Super AMOLDED display variety, patented by Samsung, is also a confirmed feature of the Note 6. It is also believed that this eagerly awaited Phablet will have a microSD card slot, because fans simply appreciated this inclusion in the S7 variants.

Many blogs contain detailed information about the specifications the Galaxy Note 6 would probably have. Although not a legitimate and credible leak, some colourful ideas can be drawn up regarding what the Galaxy Note 6 will offer to all the loyal customers and users. For starters, it is believed that the display screen would be a 2560 x 1400 resolution 5.8 inch one, along with being of storage variants 64 GB and 128 GB. The primary camera should be around 12 megapixels, along with 6 GB DDR4 RAM and an enhanced OIS.

The rumor about the RAM is debatable. We suspect that the phablet may also come with 6 GB RAM, as frankly speaking, the extra 2 GB is kind of useless in case of handheld devices. The display resolution would be of QHD variant, and to do this, Samsung would have to increase the screen size in order to support this high resolution. The Galaxy S7 came with 12 megapixel primary camera with high powered sensors, which makes us believe that the Note 6 will have an exactly same camera.

Feature Summary (not yet confirmed):

In terms of the processor, it is believed that the Note 6 would be powered by the Exynos 8890 processor, which is of Samsung’s own making. Samsung has used this same processor in the S7 variants, and it has worked perfectly so far. So the proprietary chipset would again be used in the Note 6 for technological and commercial success.