WannaCry Ransomeware : A Cyber Threat That Took the World by Storm

by kalixto
in Malware, News, Security
Reading Time: 3 mins read
A A
1

Everyone Heard of WCry or WannaCry that Struck CyberSpace

Imagine how it would feel if you switched on your computer, and found yourself faced with a flashing message on the screen – a warning about a system infection. You read on and find out that in order to unlock your system [see image below], you would have to pay the amount mentioned on the screen. That sounds like a nightmare, but it is one that millions of people around the world faced when they turned on their machines on Friday, 12 May 2017. If you’re wondering what it is, the simple explanation is ransomware. The real truth, however, is a lot more complicated. 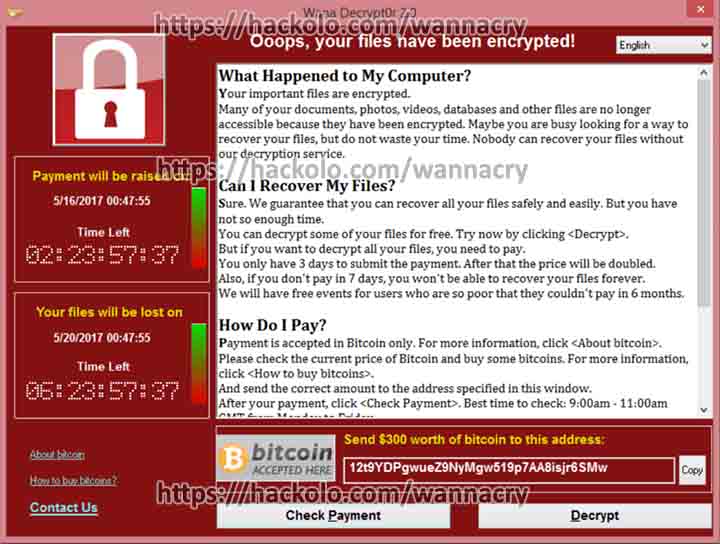 How Did It All Begin?

The software was identified soon as WannaCry or WannaCry Decryptor, and according to reports, it initially started in the National Health Service (NHS) in the UK before spreading throughout a massive network. The rapidness with which it was transferred was explained by experts as being possible due to the exploitation of a bug found in various Windows OS. This makes sense as most of the targeted systems were primarily users of Windows XP, the support for which was earlier terminated back in 2014 by parent company Microsoft.

Uniqueness of the Attack

Now ransomware attacks are common, and new reports come in every week. However, these were isolated incidents. What happened that day was a full-scale, coordinated attack. It followed a united, international strategy, affecting numerous systems throughout the world. There were reports of dozens of medical facilities being crippled in the UK, along with universities in China, banks in Russia, big organizations in the US, British and French automobile makers, and other businesses and infrastructure. According to the experts, nobody had seen anything of this scale before, and it is now being hailed as “one of the worst-ever recorded attacks of its kind”.

The sheer speed with which the virus spread to more than 200,000 machines across 150 countries all over the world is astounding. The payment demanded from the victims was $300 in Bitcoin.

End of the Problem

Help arrived unexpectedly from Malware Tech, a British security researcher, and blogger. The 22-year-old successfully put an end to the onslaught, although by accident. He found a “kill switch” within the software which permitted the owner of a specific web page to stop the attacks. The kill switch process is done by registering a domain that links all the attacker’s networks and changing the DNS servers, to All he had to do was pay $10 for acquiring the domain name, and he managed to end the malware threat. Experts are still trying to figure out why a “kill switch” was present in the virus in the first place.

Looking for WannaCry or WCry Patch

Even though the battle against WannaCry was successful, the war is not over yet. The virus is still undergoing rapid modifications and may mount an attack in a new form. While experts and government bodies around the world continue to work on a decryption key that will allow users to put an end to this problem once and for all, in the meantime, ransomware still is a live threat. Businesses and companies around the world have been asked to stay on high alert.

Please update your anti-virus software like Avast, McAfee, Kaspersky and even Microsoft – Kaspersky is one of the anti-virus companies that immediately reported WCry roams the cyberspace.

How to Root an Android Phone or Tablet Without a Computer

How to Root an Android Phone or Tablet Without a Computer